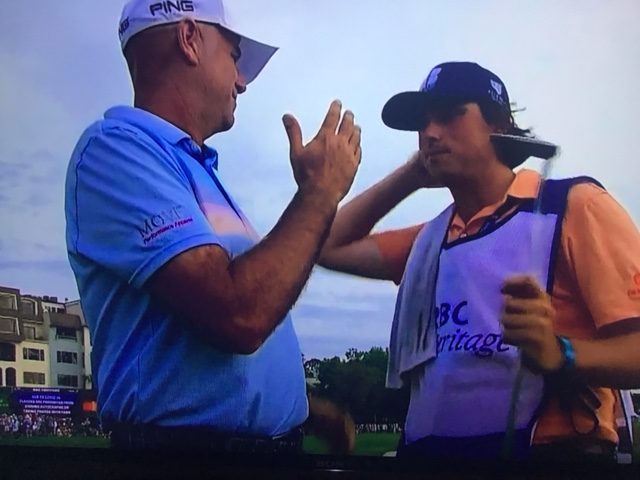 The Cinks Win at Hilton Head

The RBC Classic at Harbor Town (Hilton Head), South Carolina usually has a problem drawing the top talent on the PGA Tour especially as the first PGA event following the Masters.  Normally, I wouldn’t take in this tournament especially with the withdrawal of Bryson DeChambeau who is still undoubtedly still smarting from this Master’s performance.  DeChambeau’s yardage books at Augusta seemed to be hacked by jealous Russian golf fans in need of some bitcoin.  Stewart Cink stormed to the top of the leaderboard with a record setting pair of 63’s in the first two rounds of the tournament.  Cink would stroll through the final 36 holes to win by four shots.  Cink was never really threatened as Harbor Town doesn’t yield a lot of 63’s  although Champion Smith shot 62 in the first round but his third round 74 (+2) would keep him from competiting for the top spot.  The big story of this tournament was the father-son duo of Stewart Cink and his caddy, son Regan.  Regan had carried the bag for Stewart in his first 2021 win at Napa Valley, California.  Lightning struck again fo the father-son duo as it was pretty special watching father/son converse, debate and analyze shot by shot in the final round.  The banter seemed to keep Cink relaxed as it was clear that Regan was advising Stewart one shot at a time.  It was great to see a family working together to bring home the victory.  One of the fun elements of the event was watching Harold Varner get off the deck after he hit his opening tee shot out of bounds.  It’s kind of embarrassing for a professional to do that when your name is announced and the crowd is applauding.  Varner nonchantly shrugged it off and hit his next tee shot right down the middle.  After an indifferent iron shot that missed the green, he simply holed the chip shot for a bogey.  For the Cinks, it was the second father/son victory of the season after an earlier victory in Napa, California.  The banter between father and son on the business of analyzing the shot that was required seemed to enhance Cink’s capability to execute the shot.  Faced with a difficult hole with competitors on his heel, Cink closed the deal with an aggressive tee shot on the 17th hole, which resulted in a birdie to close things out.

The Western Intercollegiate was held at Pasatiempo Golf Club last week hosted by San Jose State University in an event with 13 university teams.    Pepperdine University won the event by 9 shots over Stanford University.  There was some great drama for the individual medalist honors as Joe Highsmith from Pepperdine took the honor on the fourth playoff hole besting Carson Lundell from Brigham Young.  Highsmith put himself in position to win with an amazing 15 foot putt on the 18th green on the 2nd playoff hole.   Highsmith  had committed the cardinal sin of putting his tee shot past the pin, which was at the top left of the hole.  The 18th plays about 170 yards downhill over a gorge populated with bunkers to a treacherous green that tilts toward the gorge between the tee and the hole.  His opponents faced makable putts from below the hole.  This is not pin to be past the hole and Highsmith decided to try an imaginative chip shot while no more than 10 feet away.  You would only have to “blow” on the golf ball from this position to get it to the hole so Highsmith’s pitch didn’t work out as the ball slithered past the hole and now he had a very difficult 15 foot putt up the hill to be in position to halve the hole.  Normally after a poor chip shot, the putt coming back almost never goes in.  Highsmith proceeded to hole the putt to the delight of his teammates  and the match would continue for another two holes where Highsmith prevailed.  Lundell missed his tee shot badly and couldn’t recover as Highsmith tapped his putt in on the 4th extra hole for victory.

Pepperdine is ranked 9th in the country and was able to negotiate the toughest 6,600 yard golf course in the country.  Pasatiempo may not be impressive from a length point of view but it offers a variety of holes that require accurate ball positioning and shot making to score well.  Pasatiempo’s greens were lightning fast and the course was in terrific shape with the event covered on the Golf Channel.  San Jose University was the home school for the event which was last won by Stanford. 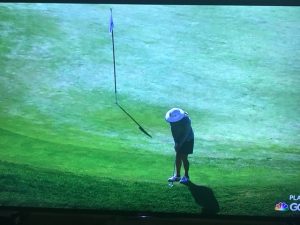 Highsmith’s difficult pitch on the 18th hole in the playoff

In another wonderful performance 3000 miles away, Declan Hickton would make two eagles powering his University of Rochester Wings to victory.  Hickton is a mechanical engineer major with a powerful set of golf mechanics.  He led URI to victory in this week’s local collegiate event and carded 8 birdies in addition to the 2 eagles to card his lowest score in his collegiate career and capture medalist honors for the event. 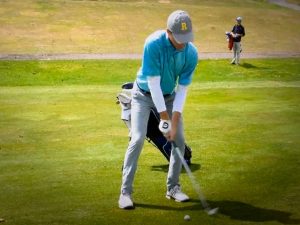