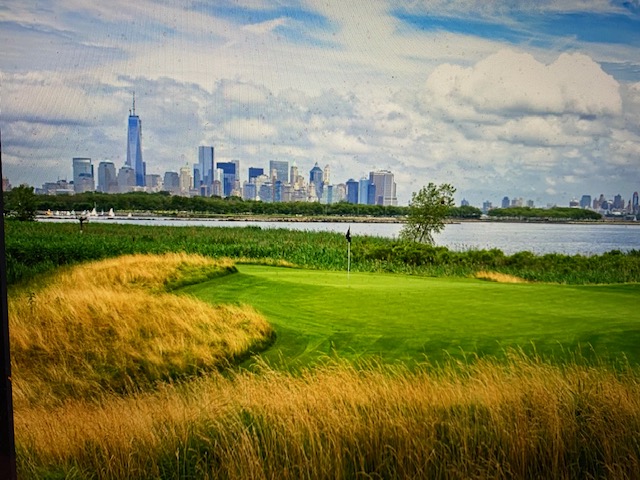 This week we had two interesting winners on the Professional Tours.  Anna Nordqvist won the Women’s British Open at Carnoustie, Scotland and Tony Finau finally broke through at the Northern Trust Open, which is the first leg of the Fed Ex Cup qualifier.

Nordqvist has had a pretty good career but it probably could have been better as this victory comes after a four year drought since winning the Evian masters in 2017.  I recall watching Nordqvist at the US Women’s Open at Cordevalle as she battled down the stretch with Brittany Lang.  She reached a playoff with Lang and some television viewer observed that Anna had touched the sand from the  fairway bunker with her 5 iron on the 17th hole.  The viewer decided to call Fox Sports and the replay indicated that a tiny speck of sand may have been touched.  I couldn’t tell and I was right there watching.  Nordqvist wasn’t assessed a penalty until she was addressing her second shot to the green on the following par 5 18th hole.  In fact, Lang was told first that Nordqvist was being penalized and that essentially was the end of the playoff.  This affair, along with a few others, led to rule changes in taking input from the coach potatoes and their VCR’s.

Nordqvist led the tournament for most of the way but found herself on the back nine on Sunday hounded by a bunch of competitors including Nanna Madsen (Denmark), Gabriella Hall (England-2019 winner), Lizette Salas (US) and fellow Swede-Madelene Sagstrom.  Nordqvist relinquished the lead briefly to Madsen and came back with a birdie on the par 5, 12th.  As usual, Carnoustie’s 18th hole determined the winner of this event.  Nordqvist hit a great drive in the fairway and navigated the second shot to a comfortable 20 feet. Many potential winners have had their chance to do the same but invariably miss the fairway to the right, which brings the Barry Burn into play for the approach shot to the ground not to mention the uncertain nature of the lie in the right rough.   Hall, Salas and Sagstrom played well down the stretch but couldn’t make the putt that would vault one of them into the lead.  Salas hit an impressive fairway wood 217 yards to the green on 18 but couldn’t convert the birdie putt.  Madsen looked like she could have been the first woman from Denmark to win a major golf championship but it all unraveled on 18.  She made the typical mistake of many of those that preceded her by having her drive find the right rough.  She would have to carry the Barry Burn with her approach shot of over 200 yards.  She carried the Burn but ended up in the bunker in a terrible place with a down hill lie.  Her bunker shot was essentially a shank and the oohs from the gallery would be the death knell for her tournament.  The “oohs” are uniquely British known for their soft tone that can only mark the tragedy of a missed shot under pressure.  We have no such equivalent in US golf gallerys-instead of “you the man”-it’s just another foul mouthed scream or yell that delivers the blow.  A double bogey plunged her to 5th place and the 18th hole at Carnoustie (“Home”) had claimed a new victim.  Nordqvist calmly 2 putted for an emotional triumph.  Minjee Lee actually had the best final round on Sunday with a 66, which was preserved by a gift and maybe a miracle from the 18th hole as her approach shot found the Barry Burn but bounced out and moved forward.  Jean van de Velde could have used this kind of break in the 1999 Open Championship-no one seems to be able to “get” this hole and it will forever be the epitaph of van de Velde’s career. 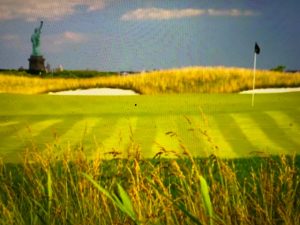 Tony Finau had a similar experience to Nordqvist in winning the Northern Trust.  The event was beset by bad weather and wet conditions which made the Liberty National course completely defenseless. Hurricane Henri forced the Tour to cancel Sunday play given the severity and potential damage of the storm and the final round was played on Monday.  Pins were accessible no matter where they were placed as there was nothing to stop the professionals from pursuing eagles and birdies.  Finau would have to overcome Cameron Smith and World No. 1-Jon Rahm.  Smith shot 60 in the 3rd round and had a birdie opportunity for the 59 on 18 and was making putts from everywhere.  He couldn’t close the deal on Monday and Finau’s back nine of 30 was good enough to get into a playoff with Smith.  Finau has been a bridesmaid so many times, you had to wonder about his chances.  In a similar way to Norqvist’s victory, the competitors unforced error would give Finau the victory.  Smith walked up to the first tee of the playoff and promptly to his significant amazement hit his tee shot way out of bounds and his second tee ball  almost found the same result.  All Finau had to do was to keep his ball in bounds as he oozed his way to victory as he finally broke through with only his second victory on the PGA Tour.

We’re a month away from the Ryder Cup on US soil at Whistling Straits.  I’m predicting another European victory–for baseball fans–this is equivalent to the current significant dominance of the American League over the National League.  I continue to think that the Europeans are more focused and more strategic to win the event.  I also wouldn’t want to be playing against Jon Rahm.   More to come in the weeks ahead.

← Olympic Golf-Schauffele Wins Gold for the USA David vs. Goliath at the Fed Ex Championship →