David vs. Goliath at the Fed Ex Championship 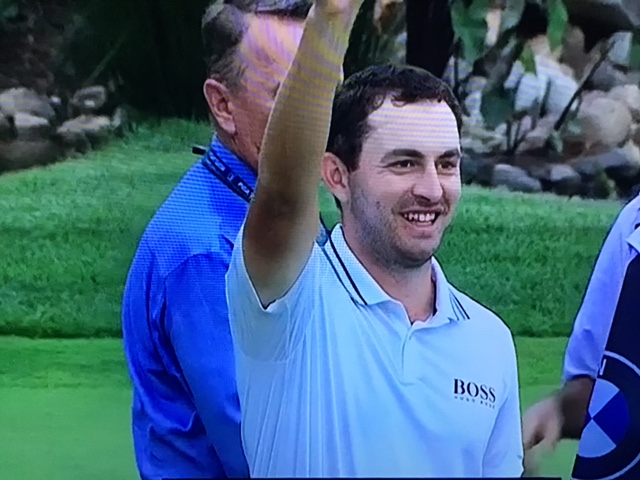 Bryson DeChambeau (BDC) brought his “A” game to the last Fed Ex qualifying event at Cave Creek, Maryland.  He has had a series of inconsistent performances in recent events even to the point of losing his caddie (whether voluntarily or involuntarily in unknown).  BDC meticulously prepares for each event and has brought the science of analytics to the game of golf previously unheard of and not really practiced by his fellow competitors.  In preceding weeks, his calculations seemed to be malfunctioning as he was missing greens or hitting greens way off position to convert those shots to birdies.  DeChambeau’s power game was intact as he began an onslaught at Cave Creek that peppered the soft fairways.  On Saturday, he had a six foot putt to shoot 59, which he missed and this may have been the omen of things to come in the final round on Sunday.  The field was attacking the course with another birdie fest due to the soft conditions but only Patrick Cantlay emerged as a legitimate contender for DeChambeau in the final round.  The stage would be set for a final round that was essentially at match between DeChambeau and Cantlay or David and Goliath.  Power vs. finesse.  The only other drama would be for those players having to finish in the top 30 to qualify for next week’s final Tour Championship event at East Lake. 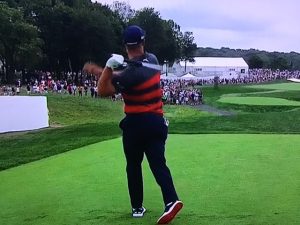 The match was set and DeChambeau answered the bell with a thunderous drive on the first hole that almost found the green over 350 yards away.  Cantlay was not about to be fazed by this tremendous display.  Cantlay was going to play his own game and stay within his skill set.  Cantlay is not a short driver of the golf ball but he knew he would be 30-50 yards behind DeChambeau all day.  While DeChambeau was making an easy birdie on 1, Cantlay’s iron shot from 120 yards was close enough to also record birdie and so it was game on.  The match was on between David (Cantlay) and DeChambeau (Goliath) as DeChambeau continued to smash humongous drives down the middle of the fairway.  On the 11th hole, he took a dangerous route to carry the water over 300 yards and swung so hard he nearly came out of his shoes with a helicopter follow-through.  Cantlay continued to play his game driving the ball in the fairway and hitting greens in regulation.  DeChambeau continued to hold a 1 shot lead as they came to the 17th hole.  Cantlay incredibly dunked his tee shot in the water and this should have been the end of the match.  DeChambeau’s tee shot ended up in the thick rough just off the green.  He would have a delicate chip shot but professionals get up and down virtually all the time from these lies.  Incredibly, DeChambeau chili dipped his chip shot and ended up making bogey on the hole, while Cantlay converted his penalty shot with a one putt bogey.  DeChambeau had been having trouble with short pitch shots all day and it appears that he might have the yips with this club as he consistently used his putter from clean lies off the green.  In the scientific world of BDC all the clubs in the bag are the same length.  I don’t know how one chips with a 45″ wedge but what do I know.  Onto the 18th and DeChambeau hit another tremendous drive and was in position to win for his 9th tour victory.  Cantlay promptly holed a 20 ft. putt for birdie and DeChambeau missed his 11 ft birdie putt for the victory and a playoff would ensue.  The missed putt was a terrible omen of what was to come in the playoff.

The playoff was as exciting as a heavyweight title fight or an extra inning World Series game.  DeChambeau continued to smash drives 320 yards in the middle of the 18th fairway, hit the iron shot to 10-15 ft and miss the birdie putt to win.  Cantlay continued to make putts from everywhere, The adage in golf that you “drive for show and putt for dough” was never more appropriate.  On one of the playoff holes (17th), Cantley faced the same chip shot that DeChambeau had in regulation but he converted the chip to gimme putt territory and back to the 18th they went for another hole.  Both guys had previously hit spectacular shots into 17 with Cantley actually besting DeChambeau with an incredible shot under pressure as both made birdie.  You just can’t give a professional or a good amateur player 5 chances to win and eventually Cantlay made another 20 footer on 18 with DeChambeau unable to convert an 8 footer to extend the playoff.  The putter was the sling that felled the giant’s driver. 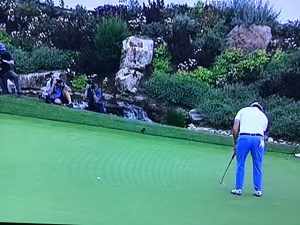 The winning putt on the 7th playoff hole

It was a tough loss for DeChambeau and he was certainly distraught with the outcome but his putter failed him and Cantlay simply made everything and made the clutch putts to keep himself in the match.  There are many golf fans that root against DeChambeau due to his unorthodox approach to the game and perhaps envy of his prodigious ability to drive the golf ball.  The simmering feud with Brooks Koepka fueled by the media with shouts of “Brooksie” are a shame and another indicator of some bad behavior generated by a minority of golf fans that spoil the game.  DeChambeau is going to have to take some deep breaths and suck it up and start ignoring all of this nonsense including the needling by Koepka in social media and in the press.  I believe that they should be paired together for team play in the upcoming Ryder Cup.  It would be spectacular for the game and give Bryson the opportunity to endear himself to the ordinary Joe golf fan.  Besides the feud, I think the USA team needs a kick and some adrenalin as a bunch of them aren’t playing particularly well coming into the event.  Players such as Justin Thomas, Jordan Speith and former World No. 1 Dustin Johnson are not playing particularly well.  Facing Jon Rahm and a bunch of motivated European players including veterans Ian Poulter and maybe Sergio Garcia are not favorable for the US.  I doubt Captain Stricker will pair the “feuding” couple  but he needs to do something special since this USA team is going to get skunked at Whispering Straits in two weeks.