Cantlay and the Euros Prevail 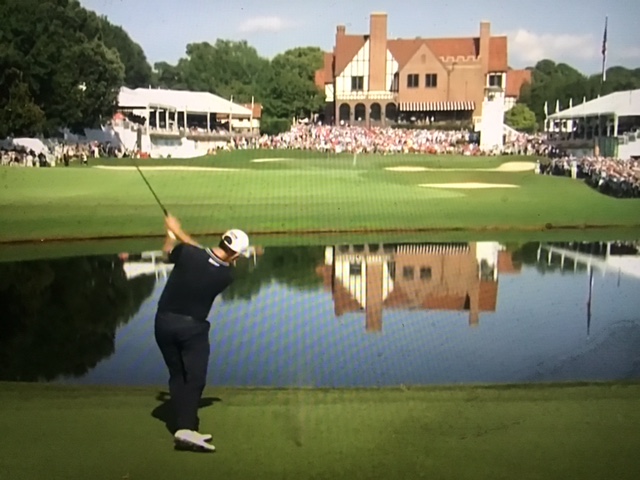 At the beginning of the 2021 PGA Tour, Patrick Cantlay was viewed as a mainstay of tour competitors but not in it’s elite class.  Cantlay has now won 4 PGA events and the last 2 events of the season including the Tour Championship.  Cantlay had a epic duel with Bryson DeChambeau at the BMW Tour Championship qualifying event last week and eventually bested DeChameau in a six hole playoff where his putting glowed brilliantly as an 18 carat diamond.  Cantlay made everything obliterating DeChambeau’s power game.  Cantlay would enter  into the Tour Championship with a 2 shot lead and never allowed anyone else to lead during the entire tournament.  The event at East Lake Golf Club in Atlanta turned into another match play event,  as this time Cantlay was pursued relentlessly by John Rahm.  Rahm exercised all of his powers to catch Cantlay but he could not get over the hump.  Once again, it seems that the gods of golf have anointed a new saint in Cantlay.  With Rahm, a shot behind on the final hole, Cantlay actually outdrove Rahm on the par 5 hole with a drive of 360 yards.  Rahm knew he would probably have to make eagle to tie Cantlay whose ball was 224 yards from the green.  These guys are pumped up on something or else the ball has some type of miracle propellent inside.  Rahm knocked a 5 iron (238 yards) right at the flag, which unceremoniously darted away to the back of the green just in the rough.  The ball mark on the approrach shot was less than a foot from the hole.  Cantlay grabbed a 6 iron from 224 yards and nailed it to about 15 ft. from the hole–game over unless Rahm could hole out from the back of the green–he did not.  Cantlay’s performance was truly remarkable in that he held the lead in one of the most important tournaments of the year with a first place pursue of $15M for the entire event.  Everyone else in the field was playing for second place–only Rahm was able to make it interesting and they played the last 36 holes paired together.  Cantlay’s level of concentration was truly outstanding and has to be compared to the likes of Tiger Woods and Jack Nicklaus in this stretch.  Cantlay never allowed himself to succumb to looking ahead–one shot at a time.  Cantlay demonstrated the highest level of professional golf in concentration, focus and achievement in winning the Tour Championship. A wire-to-wire victory after winning a six hole playoff the week is a highly improbable outcome, which makes Cantlay’s performance all the more remarkable. 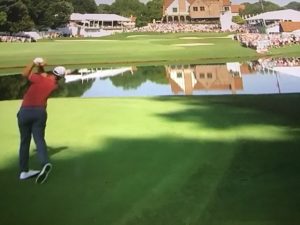 The tournament suffered a few reversals as Brooks Koepka injured his wrist and had to withdraw from the event after hitting a tree root from the rough on the 11th hole.  Hopefully, all we’ll be well in a few weeks for his expected Ryder Cup appearance.

The consensus from the Golf Chronicles group is that Koepka should not be paired with DeChambeau for the Ryder Cup and that Captain Steve Stricker won’t be dong this.  I believe it would be good for the event and potentially dilute the USA locker room which might need a shake after this Sunday.  Other than Cantlay, there isn’t a lot of guys that are playing well going into the event–Johnson, Speith, Schauffele were also rans but Justin Thomas did have a good tournament.

The group consensus is that the Europeans will take the Ryder Cup again at Whistling Straits.  The Euros, as was the case in the Soldheim, probably won’t have many fans in attendance due to travel restrictions caused by the pandemic.  The impact might turn out to be positive as it will focus the Europeans to coalesce even tighter than they usually are.

The Europeans maintained the Soldheim Cup at the venerable Inverness Golf Club in Toledo Ohio.  The Europeans simply made the putts and fewest mistakes and the matches were never really in doubt as the Europeans jumped on top of the Americans making clutch putts at the end of many matches that went to the 18th hole.  The ladies all play well and strike the ball with authority and are getting longer and longer off the tee.  The highlight was the Sunday singles match between Lexi Thomson and Anna Nordquivst.  Nordquivst, fresh from her British Open victory, is the hottest golfer on the LPGA Tour.  She peppered her drives consistently down the fairway and seemed  to hit all the greens in regulation (she probably missed a few).  The longer hitter US phenom, Lexi Thompson, bombs the ball but usually suffers with the key short putts as was the case when she lost the US Women’s Open at Olympic Club a few months ago.  On Sunday, Thompson made those short putts and the match was never more than 1 up or 1 down but neither could prevail in the end so each player recorded a half point for their teams.  The USA needed to win that match but both players played so well that a halved match seemed to be the right outcome and I’m sure the golf gods nodded in agreement.  Olympic winner, Nelly Korda played well and won her Sunday singles match handily.

Coverage of the event was poor–not a word in Tuesday’s New York Times sport section and I can’t recall seeing any highlights on Sports Center.  It’s hard to understand why the women continue to be ignored despite the high level of play that was evident throughout the matches.  The result is not a good omen for the USA in the Ryder Cup but you never know how the putts are going to fall.  The screaming and yelling by the fans throughout the matches makes it hard to watch but this is the way the players want it so  traditional golf fans have to suck it up.  Fans were screaming while the players were teeing off throughout their swing routine so you know it doesn’t bother them.  These crowds are not what you would experience at Augusta National during the Masters.

← David vs. Goliath at the Fed Ex Championship Ryder Cup Teams and POTUS →