Luke List “Digs Out Victory” at the Farmer’s Insurance Open 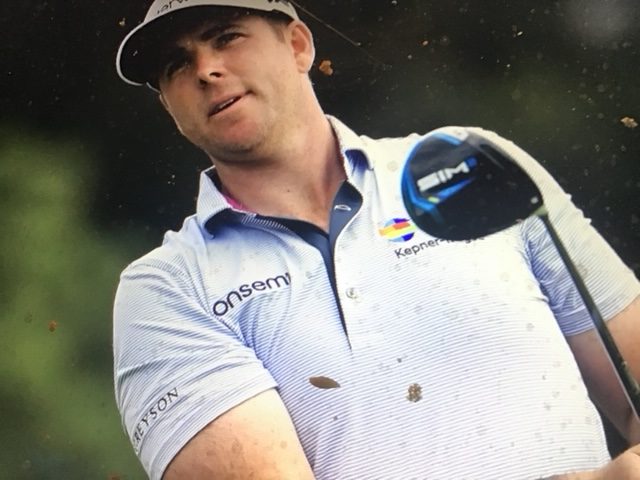 The PGA Tour finally arrived at a golf course that was capable of testing the skills of the PGA professional to the fullest–35 under par would be out of the question at the iconic Torrey Pines venue in San Diego, California.  Conditions were extremely favorable again with sunny skies and little wind but Torrey is a “big boy’s golf course.”  Many of the sub par rounds were experienced at the easier North Course but the South Course played up to its normal US Open standard.

Luke List muscled his way through 72 holes and managed to catch leader Will Zalatoris to force a playoff after Zalatoris’ putt for birdie just missed on the 72nd  hole and the playoff  commenced on the 18th hole.  The 18th hole at Torrey usually plays an outsized role in the resolution of this tournament and this year would be no exception.  The 18th is a 570 yard, par 5 with fairway bunkers on the right at the 285 yard mark and a tree laden left side of the fairway, which forces the professional to get as close to the bunker as possible on the right or ideally in the middle of the fairway that isn’t very wide for a par 5.  It would take a drive of at least 325 yards to carry the fairway bunker, which is really unnecessary for the professional, since the professional can easily go for the green from the fairway.  The green is cleverly guarded by a pond on the left and the final day pin placement is just over the pond on the right.  Players in the fairway going for the green with their second shot  will have to play away from the pond.  The best shot is usually past the hole about 15-20  feet, where the ball will release toward the lower pin position.  In past years, players have had some terrible results with excess spin on the ball watching the ball sail past the pin position and end up in the pond.  If you’re in the fairway bunker, there is no possibility of reaching the green so the key is advancing the ball to a position to pitch the ball on the green for a birdie opportunity. 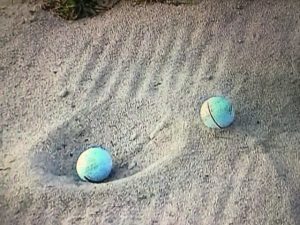 Zalatoris has been looking for his first PGA tour victory and he’s been close a number of times but this one seemed to be his best chance.  As in all professional sports, you have to close the deal and Zalatoris fell a tad short at the end of regulation play culminating with the missed short putt at 18.  List caught Zalatoris with birdies on 17 and 18 to force the playoff.  So after 72 holes, the pair met  at the 18th tee and List proceeded to go first and knock the ball in the fairway bunker.  Zalatoris could not take advantage of the situation and hit a huge cut shot that landed in the fairway bunker inches away from List’ ball.  List’ ball landed with a thud resulting in a fried egg lie, while Zalatoris ball was clean but would definitely be impacted when List hit his shot.    Now the “bunker rules of golf” would come into play. The balls were so close together–it seemed impossible that two balls could be this close to each other in a bunker in a playoff.   I thought that Zalatoris could mark his ball in the bunker since List would be hitting first out of his fried egg lie.  It seemed like there was a lot of sand in this bunker as the sand was fine and grainy like beach sand.  It turns out that the bunker rules of golf require that only List can request that Zalatoris mark his ball.  List decided not to make the request and hit his shot out of the bunker.  List’ shot clearly changed the lie of Zalatoris position in the bunker so the rule allows the bunker to be raked in attempting to return Zalatoris’ ball to its original position.  The raking began with Zalatoris’ caddy but I believe Zalatoris wanted to ensure that he could not be penalized for improving his lie in the bunker so he summoned a rules official who also decided to apply the raking technique…at least an “official” raking would be acceptable.  The gallery at the 18th emotionally encouraged the players and especially were apolauding the raking technique of the rules official.  The rules were appropriately applied and fortunately I don’t think it had much to do with the outcome.  Both players executed their bunker shots setting themselves for a potential birdie pitch over the pond. Both players had gap wedges to the green and List struck his shot to the “promised land” about 12 ft. past the hole which spun all the way back to a foot.  He was definitely going to make birdie.  Zalatoris had to duplicate this effort and his wedge shot spun back under the hole and he couldn’t convert the putt giving List the victory.  It was a great tournament with a great ending.  Jon Rahm just couldn’t convert enough putts to come through but he and a resurrected Jason Day tied for third at 14 under par.

The Farmer’s experimented with a new timing format of playing Wednesday through Saturday.  Probably the reason was to avoid colliding with the NFL playoffs, which were being played on Sunday afternoon.  It seemed that the PGA Tour was submitting to the gods of television ratings by not colliding with the NFL.    It seemed to be a positive development for the event with great local turnout and the players seemed to welcome the change especially those that were playing well coming into the event.  This trend may continue into other events throughout the year.  Golf is popular now and the sport is drawing millions of new players and interest in the Tour and it’s new set of stars is expanding interest widely.    It was good to see Torrey Pines and especially the 18th hole present a good test as we head into what should be another great venue for competition at Pebble Beach.