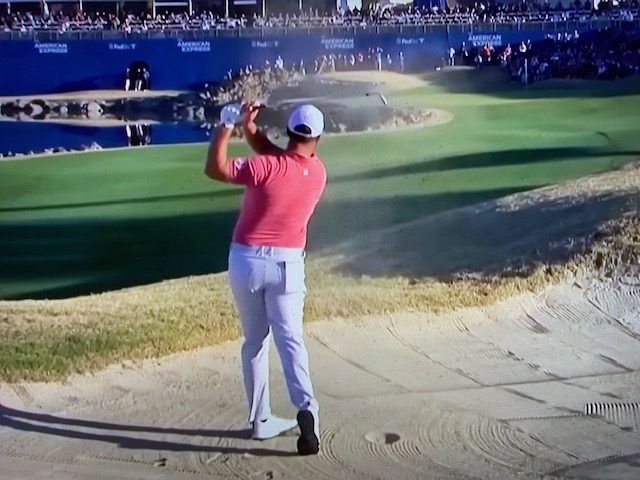 Jon Rahm barely escaped deep trouble on the 69th and 70th hole of the tournament, made a birdie on the 16th hole  and won the American Express Championship at PGA West in Palm Springs, California besting PGA Tour rookie Davis Thompson by a shot.   Thompson is a PGA rookie with a victory on the Korn Ferry  tour who went toe to toe with Rahm and was not intimidated by the former World No. 1 who is knocking on the door of regaining that distinction.  Thompson had a brilliant amateur career at the University of Georgia where he was atop the Amateur Golf Ranking in 2021.  Thompson did not lose this tournament or succumb to the pressure despite the onslaught that Rahm initiated.  Usually the golf gods decide things like this and Rahm’s approach shot to the 16th green nearly escaped a horrible bunker where birdie would have been almost impossible.  The shot skirted the bunker and Rahm retook the lead on the 16th.  For Thompson, his 50 foot birdie putt on the 17th hole hit the flagstick and careened away and his chance to tie Rahm.  It was a bad break but it was the golf gods who decided that it was not Thompson’s time especially given Rahm’s narrow escape on the 16th.  Thompson has been competitive in all of the PGA events this year and his turn on the dais will come. 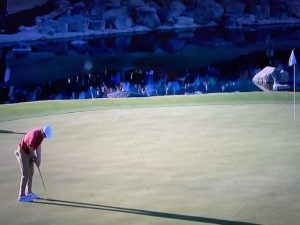 For the classic golf fan, this is the first stop of the PGA Tour in California and was formerly known as the Bob Hope Desert Classic in Palm Springs.  The first few rounds of the tournament are played at La Quinta Golf Course, the Nicklaus course and PGA West’s Stadium Course.  These are all resort courses and the weather in Palm Springs is always sunny and mild leaving these courses defenseless against the PGA professional.  The golf courses didn’t have much to offer in the way of difficulty, little rough, generous fairways and perfect greens and the birdies came in droves.  20th place in this event was 20 under par!  Most of us revere PGA West as a difficult golf course–not for these guys.  The great thing about this tournament is that no one could be counted out with virtually every hole a potential birdie opportunity.  Just to make things interesting, Xander Schauffele shot a final round 62 to take third place and was in contention on the back nine on Sunday.

Rahm was in his usual top form crushing drives 300-350 yards and having 100 pitch shots to the greens.  His putting on the back nine burned a number of cups allowing Thompson to stay in the hunt.  Rahm gave Thompson a tiny opening on the 18th hole, when he drove into the fairway bunker on the right after a crushing drive.  Rahm closed this opening with an outstanding iron to 15 feet and closed out the win.

Rahm is hotter than a firecracker.  He came from behind to win the Sentry Tournament of Champions in Hawaii two weeks in Hawaii.  While Kapalua and PGA West are very different golf courses, they reward the long hitters and Rahm is just crushing the golf ball and making it easy but you have to when almost everyone else is doing the same thing.  In these tournaments, putting is usually the difference maker and Rahm made a number of six to eight footers for birdies and some long ones–on the back nine Sunday, not much went in and he yielded the lead for a time with a miss on the 13th hole.

The tour moves to San Diego this week at Torrey Pines so the birdie fest will be over and the professionals will have to deal with a pretty tough golf course.