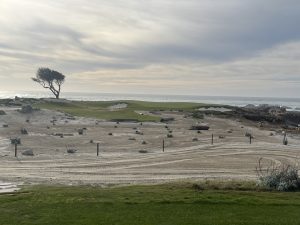 The rains throughout California have been widely reported and the damage has been severe.  An example of the severity of these storms occurred last weekend on the 14th hole of the Dunes Course at Monterey Peninsula Country Club (MPCC).   The hole is located at the Point Joe lookout right on the sea inside the Pebble Beach 17 Mile Drive.  In the pouring rain, there were a few brave souls playing the hole when huge swells emerged from the sea forcing the players to run away from the hole to higher ground as their golf carts became stuck in newly developed mud bowl that used to be the dunes approach to the hole.  The ferocity of the tides moved the boulders that shape the hole from tee to green and the path to the back championship tee became impassable.  The bunkers and the green  took on a considerable amount of seawater and it looked like the hole would be out of commission for quite a while.  The good news was that the signature, lonely cypress tree behind the green survived a considerable onslaught of 50-60 mph winds and is still intact with the same leaning as the long time right to left prevailing wind over the ocean.  MPCC staff have performed a minor miracle in restoring the hole and it has since reopened.  It’s still raining but the severity of the sea is not expected to recur with this round of storms.  The staff had to place the boulders back into their position and the bunkers had to be scraped and repaired and the green syringed to rid any remnants of salt water. 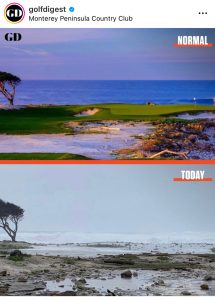 The 14th hole on the Dunes Course is the signature hole.  It is the only golf hole that crosses the 17 mile drive toward the ocean and is located off Point Joe lookout on the drive.  There is a dirt pathway from the regular tee box to get to that back tee, which is carved out of the rocks almost like a helipad.  The hole will usually draw a gallery from tourists stopping at Point Joe as they doubt that any of us can actually hit a golf ball over the rocks and the ocean.  From the back championship tee, the hole is a par 3 of 180 yards.  The wind is always blowing off the ocean prevailing from the right (ocean) to the left.  There are two strategically placed bunkers–one guarding the front of the green.  The other bunker is on the left and will catch many tee shots headed for the green but blown by the wind into the bunker.  There is always wind here both wind for and against but the prevailing wind is cross from the ocean to that strategically placed bunker left of the green.  The tee shot must carry all of the boulders and the ocean to reach the green.  Club selection is critical because running a tee shot through the green will present a challenging chip shot to try to make par.  Typically, I choose a 7 wood but will need a 3 wood against the wind.  I have also hit 8 iron with the prevailing following wind.  The green is fairly large for a par 3 but the intimidating view of the hole from the tee requires you to pay attention.  It will be interesting to see if the new changes shown above are sufficient in the coming months with the rest of the winter weather. 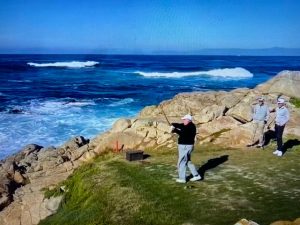