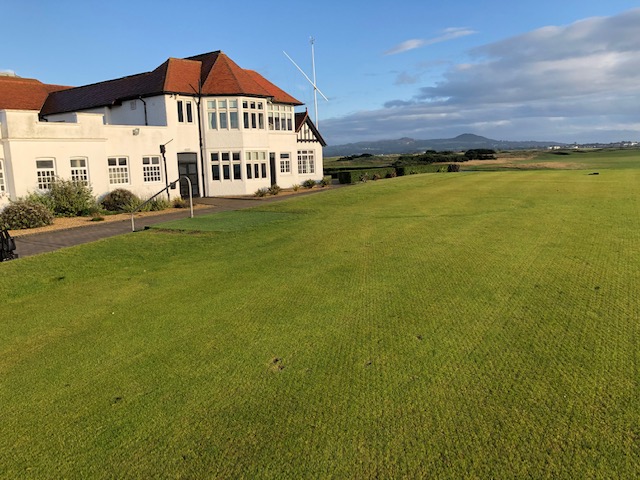 It’s the end of September and the trip to Ireland might provide some dodgy weather for golf.  There is still a lot of daylight in the days ahead as sunset is about 8PM.  Of course, you can get a round in after a full day of meetings.    The question is always posed are you coming to Ireland for golf or business-there is much skepticism posed in the answer.  The best answer is to say you’ve shown up on the weekend to play and you’ll be ready for business come first thing Monday morning.  We left San Francisco at 5:30PM Saturday on the direct flight to Dublin, which arrived at 11:45AM on Sunday.  Tee off time at Powerscourt was scheduled for 3PM.  Getting through Irish customs and immigration on a Sunday morning was a piece of cake as most people are in church or visiting relatives so we arrived at the hotel by 12:30.  The first complication was there was no room for us to occupy so I had to rummage through my bags for the golf togs.  On this day, rain gear-including pants, jacket and hat would be required.  Rain gloves were not packed as this round would only be played in reasonable conditions…pouring or horizontal rain would not be acceptable.  We would play as long as the grips stayed dry enough to not be an excuse for poor shot making.  It was helpful for me to get my usual 7 hours of sleep on the plane so I was ready to go as we hit about 15 balls to warm up for the West Course.  Powerscourt is a very nice Parkland venue in Dublin with 36 holes and today we would be playing the easier West course.  It wouldn’t matter which course today since the fairways were wet but absorbent from the previous nights rain so the terrain was not sloppy.    The course offers a variety of good holes as it sparkled against a backdrop of spells of sunshine, cloud, drizzle, mizzle and some heavy stuff during the day. The 13th hole is a down hill par 4 with a bern guarding the green.  The hole is visually attractive despite the blind tee shot as the hole requires two straight shots over the bern onto a fairly narrow green.   My favorite hole is the par 5 eighteenth hole, which is sneaky long as it winds around to the left guarded with a pond that really isn’t that menacing.  A drive and a couple of hybrid clubs had me on the green in regulation and two putts produced a hoo-hum par to complete a pretty long day.  I did have trouble with the rental short clubs as they seemed to have sole weights that were heavier than what I am used to, which produced some disappointing results around the green (and bogeys)  where I usually excel.  In any event, it was a wonderful way to start the trip. 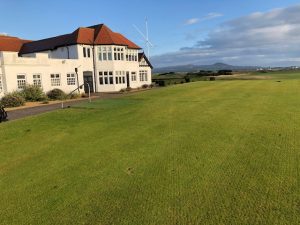 We had three seasons on Monday and a late tee off time after the business day proved to be too much to play this day.  As we approached our 3:30PM tee off time, the rain had turned rather nasty whereby the grips would have been gone in a matter of minutes.  Port Marnock is not the type of venue where you want to struggle–bringing your A game is very important.  The course was emptied with this weather and a busload of players had this forlorn look as they too had to pack it in.  We adjourned to the clubhouse for coffee admiring the calvacade of club championships, professional events and prestigious amateur events that have been played here.  The club turns 125 years old this year.

We had better luck with the weather as the dominant feature of the day was sun rather than cloud and rain.  We promptly teed off at 3:30PM and the prevailing wind, which is usually against for the entire front nine was pretty benign enabling us to keep the ball in play and move around decently.  As we holed out on the par 3, 9th hole,  the heavens opened and the downpour began.  Fortunately, there was a covered shelter just beyond the green and you could tell that this event was only a misplaced cloud that had lost its way over the horizon.  We waited it out for about 5 minutes and the sun returned.  After a day of rather indifferent golf, I birdied the 18th hole again.  I had birdied two years ago and the memory was fresh as to whether I could do it again.  The 18th is a par 5 where the tee shot has to be driven down the left side of the fairway as there is a bern that crosses the fairway.  Depending on the wind, the second shot needs to cross the bern which runs in a line from the left side of the fairway all the way up to the green.  Any second shot that is hit straight or to the right will find a sea of bad stuff, where you will be lucky to find the ball.  Two years ago, I didn’t know this so I hit my second shot absolutely perfectly straight with a 3 wood that miraculously cleared the junk and ended up about 100 ft. from the hole on this huge green.  This year, with that experience in tow, I hit a 3 wood off the tee and my second shot perfectly down the left side catching the edge of the green about 30 feet from the hole where we two putted for the birdie.  This time, I played the hole correctly. 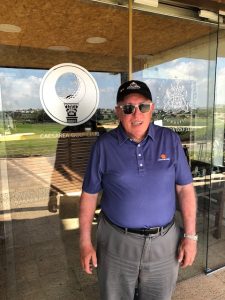 We visited but did not play Caesarea Golf Club in Israel.  I had played it many years ago and remember that I was the only person on the course.  My Israeli general manager who admittedly knows nothing about golf caddied for me at that time (circa. 2002).  I have not played the course that has since been redesigned by Pete Dye in 2009.  The concept of golf in Israeli is rather amazing as water is a precious commodity in the country and all the water in its irrigation systems would have to be reclaimed.  Caesarea is a magical place in Israel with an incredible history of over 2000 years from the rule of King Herod in the years before Christ was born to its remarkable mercantile history and domination by the Romans, Arabs,  Christians,  and Turks where commercial activity and war raged up to modern times.  Thinking about playing golf on this land is a bit weird as the history of the place is overwhelming.  The course itself has been redesigned a few times and now measures over 7400 yards from the tips and 6500 yards from the regular men’s tees.  I surveyed some of the course and found it to be pretty straightforward with very little play.  In 2010 the course is now ranked of the Rolex World Top 1000 Golf Courses.  I never heard of the Rolex Top 1000 so I’m not sure what that means.  What is important is that golf can be played on a course right in the middle of one of the most wonderful places on earth. 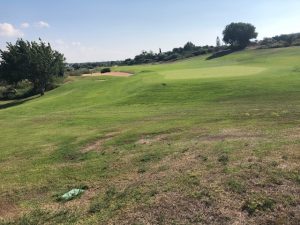 Congratulations to Saxon McLane in winning the under 13 Junior Club Championship for the second year in a row at Cordevalle Golf Club.  It won’t be long before Saxon will be beating his dad Mike.

On the University front, Declan Hickton had a fantastic 69 to enable his University of Rochester Golf team to finish 3rd out of 25 teams in the Fall Invitational at the Williams Fall Invitational at Taconic Golf Club in Williamstown, Massachusetts.  Hickton’s final round enabled him to finish 6th overall.  I last played this venue in late August, 1978 with Linda several months pregnant with our first child driving a golf cart.  We had gone there for a quiet 4 day weekend of live drama (Arturo Ui) and the Boston Pops.  Of course, I couldn’t resist a round of golf at Taconic and Linda was a good sport about it.   Ian was born on November 1, 1978-1 month premature,  and I was blamed for this after the golf cart experience as Linda bounced around the terrain during the round.