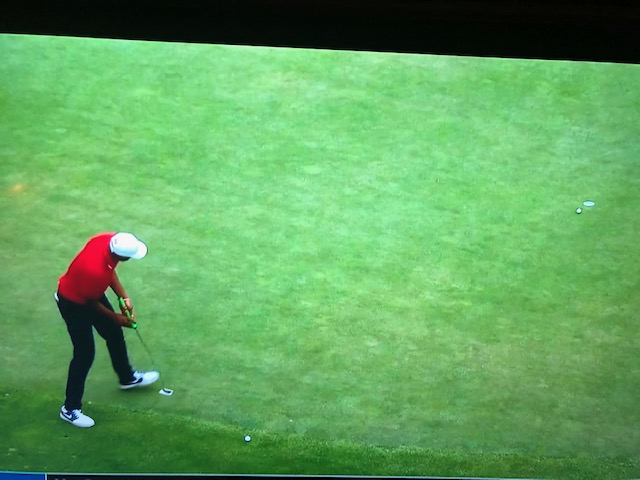 The USA team, captained by Tiger Woods, retained the President’s Cup in dramatic fashion on Sunday as the team powered through in the Single’s matches defeating the International team 16-14.  It was a struggle for the USA and a tremendous achievement for Tiger Woods. At one point in the proceedings, the USA trailed the Internationals by four points.  Things seemed to turn for the USA during the afternoon fourballs on Saturday where the US cut the deficit to 10-8.  This was the time to swing the momentum as the US team clearly had the depth and experience to prevail in the Sunday’s singles matches.  The big issue was whether the US would  be too far behind to catch up in the Sunday singles.  Saturday afternoon proved to be the momentum swinger as the USA was able to step it up and close to within 2 points.  The pressure that was squarely on the US side shifted to Captain Ernie Els and the Internationals as both sides strategized the pairings for the Sunday singles.  Captain Tiger Woods rested player Tiger Woods on Saturday and this would prove to be a brilliant move especially in view of the strategy that was employed on Sunday. 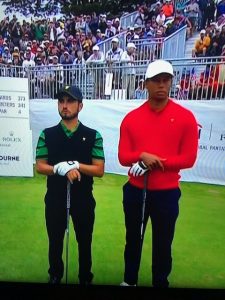 Tiger vs. Ancer in Match 1–intense

International standout Abraham Ancer.  Ancer had talked up the possibility and desire to play Woods with a lot of confidence in his voice.  Woods knew that the match against Ancer would set the tone for the US team rest of the day.  These players (on both sides) are so good that an emotional lift from the first match would be difficult to overcome.  Woods and Ancer played brilliantly but Tiger was just a bit better closing out Ancer on the 17th hole for a USA victory that propelled team emotions.  Match after match seemed to be headed to the US side throughout the day.  Another big momentum changer came from Tony Finau who found himself 4 down at one point to Hideki Matsuyama.  Finau looked dazed and confused and was getting trounced until I noticed a slight pickup in his swing motion.  It seemed that he found his tempo on the 8th and 9th hole and began hitting quality shots, which put himself in position to win holes.  His demeanor changed rapidly and he began to catch up and eventually square his match–his 1/2 point was better than a win as it deprived the Internationals not only of a win but it seemed to sap the strength of the group in the rest of the competition.

Then there was Patrick Reed who came into the Sunday singles with an 0-3 record in the matches.  Reed was being continuously abused by the raucous crowd in the wake of his controversial play out of the sand in the previous week’s tournament where he was penalized and labeled a “cheater.”   The fans encouraged by some of the International players had been cussing at Reed all week.  Reed’s caddie went after one of these fans on Saturday afternoon in defense of his boss and subsequently officials suspended the caddie.  Reed would be playing on Sunday with his coach on the bag, which is an additional disadvantage.  Reed stormed out to a lead that would reach 7 UP over CT Pan and eventually closed him out for a 2 Up victory.  No matter what you think of Reed’s controversial plays, his temperament or his personality, this guy can really play.  It takes considerable skill and guts to overcome a hostile crowd playing golf–the mental toughness to stay focused on the task in front of you  is immense, and Reed showed true grit in earning his point for the USA side.  The media has not been kind to Reed and while some of the criticism is deserved, Reed responds with his golf clubs and powered through all of it. 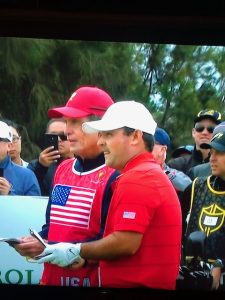 This victory belongs to Tiger Woods.  He went undefeated in the competition and played in top form.    You would have to say that Tiger was the MVP in the event. He also demonstrated considerable leadership skills in holding the team together and getting every one of these players to pull their weight to victory.  After the first few sessions, the team seemed lost and visions of the Ryder Cup loss had to creep into their thinking.  Woods persevered through the worst of these matches and encouraged his guys to stick together bestowing the confidence in their skills to overcome what should have been an overmatched International squad.  Captain Ernie Els was disappointed.  The International squad had the momentum for the first three sessions but started to fizzle on Saturday afternoon..  He almost pulled off an improbable upset in these matches but in the end, his squad was outmanned by a powerful team led by the best player of the modern era. 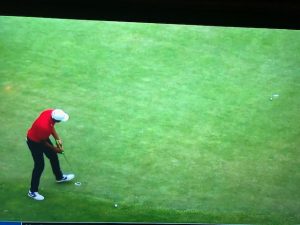 As for the President’s Cup as an event, its not a big deal but watching great players compete on a world class course made for a great event and record TV ratings on the Golf Channel and NBC’s coverage.  Royal Melbourne was a true test for these players with its very slick greens and well bunkered layout created a great match play venue.  I had predicted an International victory on the premise that the USA would go through the motions, get too far behind in the four man matches and not be able to comeback and win enough singles matches.  I underestimated the prowess and leadership skills of Captain Woods–good for him and good for the game as we enter what could be a very interesting 2020 season.