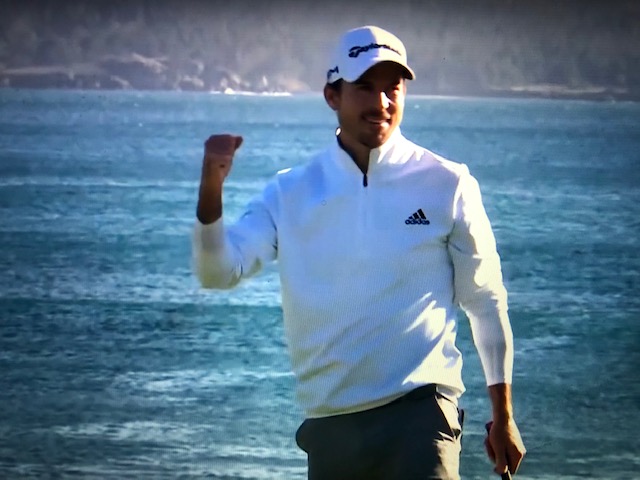 Nick Taylor became the first professional from outside the US to win this event since V. J. Singh in 2004.  This year was a very entertaining event with a number of storylines.  The first storyline was the weather–it was sunny and cool throughout the week with no rain and perfect conditions for golf.  The three courses, Pebble Beach, Spylass Hill and Monterrey Peninsula’s Shore Course, were all running with crisp fairways but the greens were quicker and better than prior years and presented a good challenge.   Conditions were infinitely better from a year when the tournament was pelted with hail, wind, rain and cold, which had to be completed on Monday morning after a series of delays.  Taylor would have to defeat 5 time winner-Phil  Mickelsen.  Mickelsen, the 2019 winner, was in the same position that he was in the 2019 Final Round.  A shot behind Paul Casey, he outplayed Casey down the stretch and took the Waterford glass trophy for the fifth time.  Phil seemed to have the intimidation advantage going into this year’s final round,  which has thwarted the leaders going into the Final Round.  Taylor had only a few victories on his resume and was competing against one of the most popular players on the PGA Tour.  The crowd as usual was behind Mickelsen.  Mickelsen maneuvered himself into this position with a breath-taking round on Saturday.  The most incredible shot was a bunker shot on the easy par 3, 7th as Phil knocked it into a virtual impossible lie in the back bunker.  Mickelsen nearly holed that bunker shot for an incredible par and, he himself, stated that it was probably one of the best bunker shots that he hit in his career.  The round was an amazing array of chips, bunker shots caused by missed fairways.  There is some banter going around that the bunker shot should be renamed as “the Phil.”  Mickelsen dropped in another putt on 18 to make a birdie to get within one shot of the lead.  Meanwhile Taylor was cruising competently to an under par round of 69 at the difficult Spyglass Hill venue to maintain his slim lead going into the Final Round.  His round included an eagle on the par 5, 7th hole.  This is probably one of the few holes at Spyglass where an eagle is even possible.  The other par 5’s–No. 1, No. 11 and No. 14 could not even present the opportunity.

As they teed off in the Final Round on Sunday, the tournament quickly became a match play event.  The rest of the field could not mount a serious threat to the two leaders.  Mickelsen birdied the second hole and managed to tie Taylor.  Taylor had led for the first 55 holes of the tournament and seemed to have a demeanor that illustrated grit and determination.  He wasn’t about to yield the lead and he never did. Taylor converted a few birdies on the front side including the par 3, 5th with a fortuitous bounce out of the left rough which spun about 7 feet from the hole.  While Taylor bogeyed the difficult 8th hole, Mickelsen airmailed the green with his approach shot and his flop shot out of the spinachy rough rolled past the flag and off the green into the fairway.  It was kind of a mess and resulted in a double bogey so Taylor actually picked up another shot.  Taylor then birdied 9 to take a 5 shot lead.  Mickelsen responded with a tremendous birdie on the difficult 10th hole with a fabulous iron shot after a thunderous tee shot.  At this point, the weather entered the picture as winds that had been predicted by weather forecasters began to blow.  The broadcast crew made a very big deal about the wind as if these guys didn’t know what to do.  Gusts were in the 25 MPH range but the newspaper accounts would have you believe they were playing in a hurricane.  Last week, Super Sunday, the winds reached 50 MPH and you couldn’t even keep a ball on the tee and any putt with the wind would roll away 10-15 ft. from the hole.  I believe the wind initially unsettled both players as Taylor started to lose his driver to the left as he missed the 11th fairway and made bogey.  The 12th managed to trample on both players primarily due to their club selection as both players went over the green and both pitches back to the green were poor and amateur-like.  Taylor made a double bogey and Mickelsen made bogey–now it’s a 3 shot lead.  Taylor made another poor pass at his tee shot crossed the bunker on the left side of the fairway but managed to stay off the cart path and he was able to extricate himself and make par here.  After a great tee shot in the middle of the fairway, Mickelsen’s approach shot flew the green as he probably had no more than a pitching wedge in his hand.  It was a big unforced error and the ball was 30 yards over the green near the scoreboard and a bunch of rough.  After the situation on 12, this shot was incredibly difficult and once again Phil produced a miracle flopping it over everything and catching the green.  This green severely slopes to the ocean and with the pin on the right, the ball slithered by the hole and nestled about 20 ft. away almost against the collar.  This would be a certain bogey but this is Phil Mickelsen and the golf gods imparted one more miracle to add to the previous shot-Mickelson holed the shot for an improbable par.  It looked like the end was near for Phil as Taylor would have to implode to give Mickelsen a chance at his sixth victory in this event.  The end came on the 15th hole as Taylor missed the green with his approach shot and holed his chip shot for what I would call “game over” shot.  He would add another birdie on the 17th to secure the victory.  The gods of golf smiled on Mickelsen with his Saturday performance but we all know this game is fickle and you can only get away with so much.  Mickelsen hit a mighty drive on the 18th at least 330 yards and knocked his approach shot in the front bunker.  How about another “Phil”–it didn’t happen and Mickelsen ended the tournament with a par.  He needed a birdie to finish second and secure 50th place ranking on the PGA Tour.  It didn’t happen and he is now 55th.  It was another very cool and classy event at Pebble Beach as something special always seems to happen here every year.

Mickelsen holes the impossible at 13 on Sunday 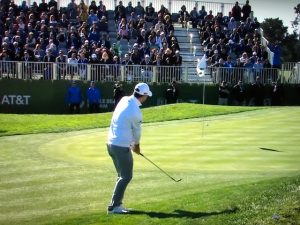 Taylor seals the win with a chip in on the 15th