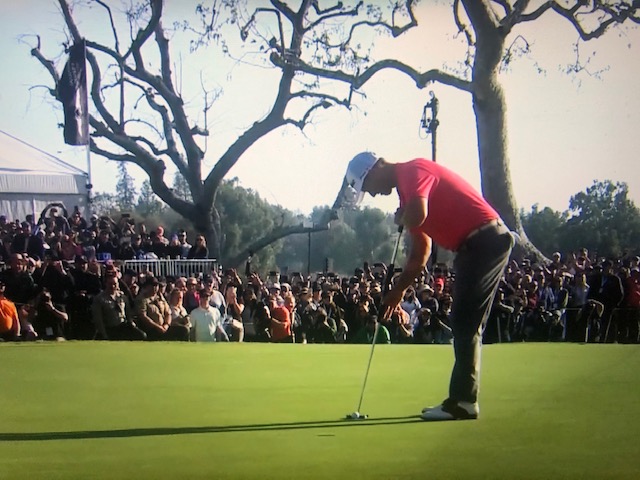 Adam Scott  persevered through a thicket of competitors and managed to eke out the victory at the Genesis Invitational at the iconic Riviera Country Club.  I would conclude that the golf course actually won this tournament as the course set up was the most difficult of the season so far.  Riviera threw a lot of weapons at these professionals with fast greens, quirky pin placements, fast fairways, kikuyu grass and the course took its toll on the competitors especially on Sunday.  One competitor who was completely defeated was Tiger Woods.  Tiger is on the cusp of breaking the all time wins on tour as he is currently knotted with Sam Snead at 82 wins.  Riviera has not been particularly kind to Tiger as he has never won here and neither did Jack Nicklaus.  There aren’t too many courses, if any, that have deprived Nicklaus and Woods of a tournament victory.  The greens were particularly tough on Tiger and I thought he played tee to green relatively well but he did not figure out these greens and he wasn’t alone. Tiger ended up finishing last in the qualified field but I still think there are positives that come from this as he prepares for another go at defending his Master’s 2019 Championship.  I’m sure he picked up a number of things to work on and he should be back in contention in the coming weeks leading up to Augusta.   Among some of the stranger statistics compiled on the PGA tour are putts missed within 6 feet.  Riviera leads every other course in this metric by a considerable margin. 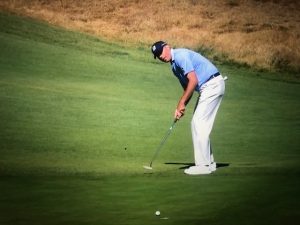 Kuchar holes out from off the green to stay in the hunt.

Having played Riviera many times, the course offers a wide variety of looks and challenges.  It starts with an easy par 5 on an elevated tee just outside the Pro Shop and then turns abruptly difficult to the 484 yard par 4, which is on my list as one the most difficult holes to play.  The par 3 of 241 yards at the fourth hole claimed more than a few victims as club selection was difficult with most of the pros coming up short and having to navigate either very long putts or very difficult chips.  The par 4, 310 yard 10th hole has a risk/reward beta that is like being between Scylla and Charybdis (the lesser of two evils for you Greek mythology fans).  A number of victims were laid waste by this hole as attempts to drive the hole and get close often ended in one of the bunkers or the spinachy kikuyu.  A few players were able to make birdie with the pin in the front position on Saturday.  Third round leader Matt Kuchar was facing a barrage of competitors including Rory McIlroy.  It was assumed by most golf pundits that Rory would storm by Kuchar with his length and consistent play through the first three rounds.  After making birdie on the easy par 5 first hole, McIlroy carded a disastrous triple bogey on the par 4, 5th hole after flying the green with his second, a botched chip with three putts and was never able to recover as he finished 3 shots back at 8 under par.  He was 5 under on the par 5’s for the week and I believe that this a good example of how difficult Riviera was this week.  Scott, in the same group, also took double bogey on the 5th.  I took a little bit of sadistic pleasure watching these professionals miss putt after putt on the 150 yard, par 3, 16th hole.  With pitching and gap wedges in their hands, you would think that this hole would have yielded a plethora of birdies.  Instead a number of really good shots were not converted from inside of 8 feet–a lot of the guys were talking to themselves as they continued to misread the subtle breaks to this difficult pin.  A bunch of lesser knowns came out of the back to charge at the leaders on Sunday.  Scott Brown Sung Kang, Joel Dahmen, and Max Homa almost made it but couldn’t convert the critical difference maker to put the pressure on Scott.  It was a bit difficult watching Harold Varner unravel a bit on Sunday as he started the day only a shot back.  He would make a few errant swings on this day, (including a 129 yard tee shot on the 10th), which really cost him the opportunity to seriously contend at the end.  Scott missed a birdie putt on 16 but had a two shot lead on the 17th tee.  He needed to make four good swings to secure the victory and that is exactly what he did  in very dramatic fashion under pressure.  He had won a rain-shortened 36 hole event here years earlier that didn’t even seem to count so this was a brilliant victory for Scott.