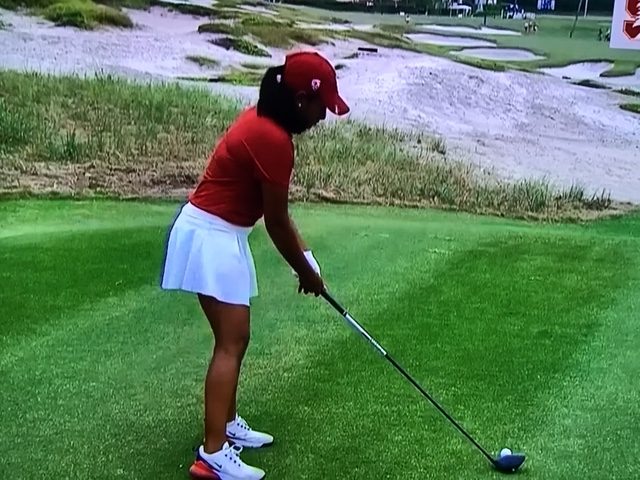 The Stanford Women’s golf team proved once again why they are the best women’s golf team in the country and certainly probably the world with their team victory in the Jackson T. Stephens Cup played at Seminole Country Club in Juno Beach, Florida.  As many golfers are aware, Seminole is one of the most exclusive golf clubs in the country as their membership and practices are in the class of Augusta National, Cypress Point and Pine Valley.  The course is made to be pretty difficult by swirling winds that effect play on many of the holes along with treacherous greens.  The greens are angled and narrow towards the back of the hole so attacking these pins for birdie opportunities could lead to some bogeys and the dreaded “others”.  Bunkering is well placed and up and downs for par from the Seminole bunkers are well earned. 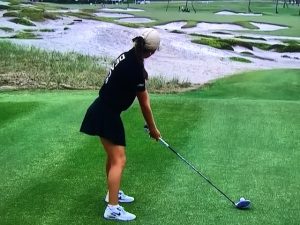 The field for the Stephens Cup was stellar with the best collegiate programs in the country participating.  Wake Forest ran away in the medal competition but the fight for second place was intense with Stanford making it through to the final match play round.  Rachel Kuehn of Wake Forest was the medalist for the event and the Demon Deacons lapped the field in a rout.  However, match play would be quite another story  as the Deacons would be matched up against the No. 1 team in the country.  The finals are match play with 3 points out of 5 available required to win the Cup.  The best amateur player in the country, Rose Zhang from Stanford,  was out of the top 10 in medal play but match play would produce quite a different outcome.  Wake Forest knew that they would have to generate early momentum so they put out their ace, Rachel Keuhn, to play the Stanford freshman, Megha Ganne.  Ganne is a gritty competitor with an outstanding junior career so she would not be intimidated by Keuhn.  Keuhn was outdriving her by at least 20-25 yards but Ganne was right there making putts and maintaining a slight lead.  On the 17th hole, Ganne holed a putt from about 9 ft. to win the hole and send the match to the 18th.  Keuhn outdrove Ganne by at least 35 yards at 18 but Ganne was in the center of the fairway and hit a wonderful iron shot to the left side of the green about 25 ft. out.  Keuhn followed with a good iron shot for a makable birdie inside of Ganne.  But Ganne, turned out the lights in this match with a remarkable conversion of the 20 ft putt for birdie and the first match point for Stanford.  Rachel Heck ground down her opponent and eventually turned in a 3 and 1 victory on the 17th hole.  The handwriting was on the wall and after a breakthrough by the Demon Deacons in the third match.  In the fourth match,  Rose Zhang rose to the occasion and defeated her opponent 3-2 to clinch the victory for the Cardinal.  Rose was at her competitive best just grinding and making putt after putt for the victory.  The Cardinal would win the Cup winning 4 out of the 5 matches. 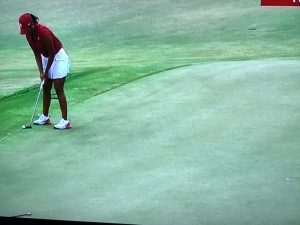 The Cardinal, under coach Alice Walker, are a real team and have a sincere and uncaring commitment to their fellow players.  There is no complacence on this team.  All collegiate players  and coaches work very hard at their games especially at the highest amateur level but Coach Walker is able to motivate this group to constantly get better and view life and golf as serious challenges.  We just saw a baseball team win 111 games and lose to a team that they had beaten 14 out of 19 times this season.  The Stanford team finished over 20 strokes in medal play behind Wake Forest but when it came to team competition, it was game on.  It’s hard to keep winning and stay on top–just ask those guys that won 111 times and played only 4 games more than the rest of their league–you have to have the grit, patience and persistence to react to situations on the golf course.  All elite programs practice hard, Walker brings a ton of experience as a professional player, golf coach and educator.  Her players are destined to become professionals–they have the golf skills–her job is to harness those golf skills with a demonstrated ability to lead these women into becoming responsible individuals as well as outstanding players.  It’s a task that is never ending and one that she takes very seriously.  The Cardinal is certainly a program that looks invincible for the foreseeable future.