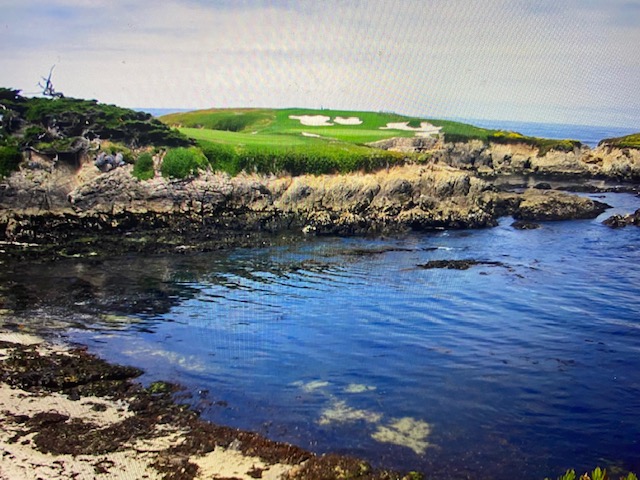 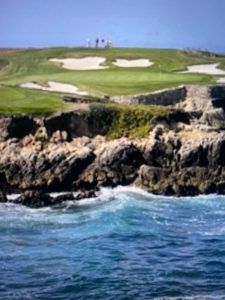 A special feat occurred this week at the venerable 16th hole at Cypress Point.  SMU freshman Christian Clark knocked a fairway wood over the Pacific onto to the green and directly in the hole for an ace.  There were plenty of witnesses and it has to be one of the most exhilarating shots this young man has ever hit in his life.  The SMU golf team was playing a practice round prior to its appearance at the Cal Poly Invitational which was held at the Preserve.  Clark, who hails from Dallas, Texas, had never played Cypress before.

The 16th at Cypress is one of the most breathtaking holes on the planet.  It has to be one of the hardest and most intimidating holes that you can play.  There is nothing between the player on the teeing ground and the front bunker guarding the green but the Pacific Ocean.  The carry to the green is 230 yards without any wind, which is always highly unusual.  Young collegiate golfers are not intimidated and have no fear and Clark’s shot was a well struck fairway wood.  There is a bailout area about 175 yards on the left for those players that are content to turn this hole into a par 4.

My best experience at the 16th was a driver that flew the green on the left and landed on the beach.  Up until this point, I was having a pretty good day and was prepared for the inevitable drop and probable double bogey.  However, it was low tide and my caddy proceeded down to the beach and spotted the ball sitting up on the wet sand.  I was prepared to take my punishment but he told me to come down and hit this ball.  I told him it was an impossible shot and his comment was “You got this, just hit the ball and don’t take any sand.”  The ball was sitting up nicely on the wet sand but there is a 60 foot rock wall in front of you.  He went back up to the green and offered himself as the target.  “Just hit it over my head and don’t worry about it.”  I hit the shot clean and it sailed over the caddy’s head–I couldn’t see the shot land from the beach  but the caddy screamed and he yelled, “six inches.”  An improbable par would be recorded on the card.  I just shook my head and said, “You could give me another 100 balls and I would have never been able to pull this shot off.”

The 16th at Cypress is probably the closest hole to hallowed ground in the world of golf  It is truly an amazing experience.