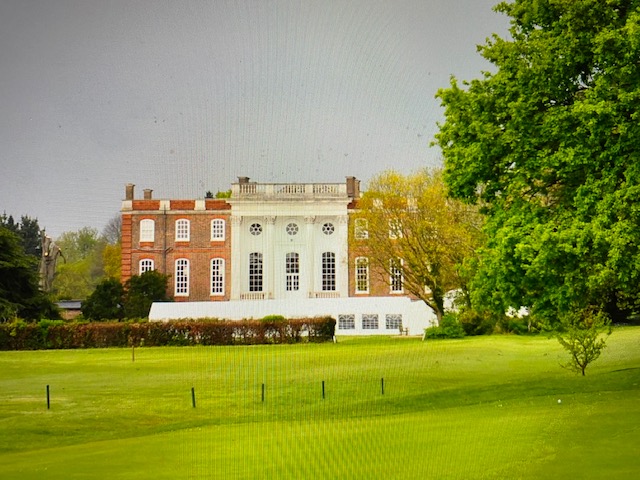 The club and course are located in a exclusive suburban type setting in the parkland area of Petersham about 9 miles from Central London.  You drive through an unmarked private lane through a stone turret to enter the course but beware as the road bisects the 18th fairway.  You will have to stop and make sure that there are no airborne second shots to the 18th green before proceeding.  The entrance to the course also leads you by the imposing Sudbrook House clubhouse on the right side as you enter the parking area.  Unlike many other UK public and private courses, the entrance to the club is not cluttered with annoying signage of what you can and cannot do.  Most UK clubs are inherently unwelcoming but Richmond gives you the sensation that you are about to play a special place.  The course is an interesting parkland layout, which is challenging but not very difficult–often the weather will dictate the quality of the round with various sessions of sun, wind, rain and fog and the continuous drone of jumbo jets overhead as the course is on a direct flightpath to Heathrow Airport.  The course is famous or infamous for having been bombed during the second World War by the Germans.  The bomb site probably had something to do with its proximity to Heathrow Airport.  The members were not deterred and  played throughout the war despite the wartime conditions so the club issued the following temporary rules of golf to account for bombs that hit the course as follows: (fortunately none of those bombs hit the Sudbrook house). 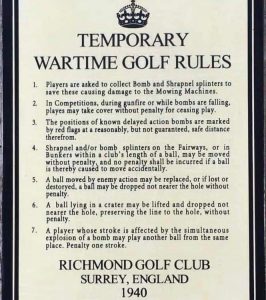 The toughest hole at Richmond is the 17th, which is a right angled dogleg from left to right.  The hole is long so its very difficult to cut the corner and fairway bunkers are strategically placed to catch tee shots that are too far left.  Tee shots that miss the dog leg to the right will have difficult recovery shots.  There is a ditch at the 130 yard that crosses the fairway so a precise shot to the green is required into an elevated and rolling green.  In bad weather, the third shot can be pretty intimidating and makes the 17th, Richmond’s toughest hole for most players.  The 14th hole is a good looking par 3 of only 156 yards surrounded by bunkers.  The green is elevated so an accurate tee shot is required as the green is rather small.  I had the experience of losing a ball in the right side green-side bunker and tried to invoke one of the World War II rules whereby the ball was effected by bomb shrapnel.  Needless to say, my playing partners had a good chuckle in dismissing that interpretation.  The 18th is my favorite hole with a blind drive over gorse bushes onto the fairway with a clear shot to the green over the entrance road.  Bunkers are strategically placed left with a similar depression on the right similar to the Valley of Sin at the 18th hole at the Old Course.