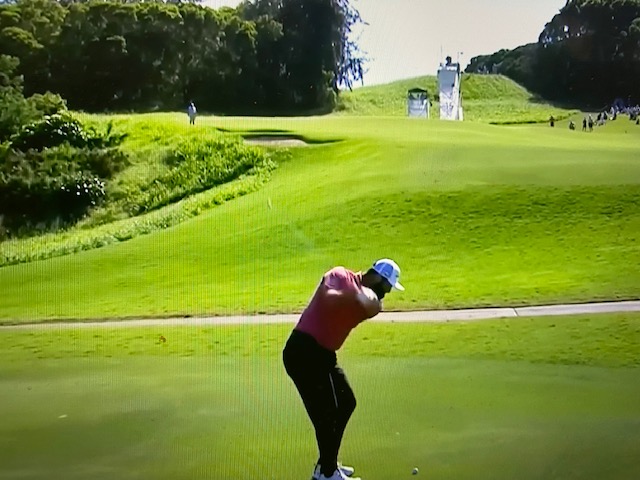 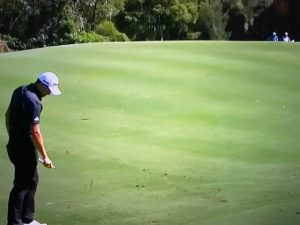 Golf can be a cruel game.  The interesting thing is that golf extracts pain and suffering from all levels of competition.  It can be the $2 dollar nassau, the Sunday four-ball, the Club Championship, the US Amateur and the PGA Tour.  The phenomenon for this condition is dictated by the  gods of golf and they were in full regalia on Sunday afternoon in Kapalua, Hawaii.  Colin Morakawa, a multiple major championship winner, led the Sentry Open at the Plantation Course by six shots at the 54 hole mark in the tournament.  Morakawa was winless in 2022 and looking to recreate the magic of winning professional golf tournaments again.  Morakawa lost his ability to control the golf ball in 2022 as he looked to recreate accuracy with his iron play by moving the ball from right to left.  He also decided to change his putting grip.  Morakawa rediscovered the magic and played flawlessly for 66 holes where he seemed to be playing the tournament as a casual walk in the park at 24 under par.  While the rest of the field was competing for second place and a good paycheck for the tournament, the gods of golf  began to rattle Morikawa’s cage.

In the meantime, Jon Rahm went on a tear and started to cut into Morikawa’s lead with a barrage of birdies.  It’s almost impossible for a professional to have a six shot lead and lose that type of lead but the Plantation course is a venue that makes it possible.  The Plantation course is a long trek of 7,500 yards plus but length means nothing to the professional when the trade winds don’t blow.  There was no wind on this golf course for the entire four days of the event and the players knew that birdie was equivalent to par for this course.  The leaders were going to go low and Morikawa and a host of others did just that.  The end for Morikawa came quickly and without warning.  He made a terrible amateurish mistake on the 14th hole as a routine bunker shot skulled off to the right side of the green in the spongy rough.  Morikawa gasped under his breath, “oh my god” as he watched the ball squirt into this horrible lie.  After an indifferent approach chip, his putt lipped the cup and he now would record his first bogey of the tournament.  When the gods of golf appear and rattle your cage, the putts never go in.  If just the putt went in to absolve you of the unforced error, the squirt chip would be forgiven, confidence would be restored, the lead would be intact and the rest of the holes could be attacked.  Alas, the putt is missed, the squirt chip is the cause, the first bogey is recorded, confidence is completely shot and now the word “doubt” creeps in.  Rahm is charging, birdie, eagle and now the lead is only one.  The end is in sight, everything is speeding up, you start aiming the ball instead of free swinging–the previous 66 holes of bogey free golf are a distant memory and now it’s over, no way to recover.  Is there?  Morikawa misses the green on the 15th hole and he chunks the delicate chip with the decel motion of a 30 handicapper–it’s really over now.  Rahm roars on and makes an improbable birdie on the 18th hole after an indifferent approach shot that landed into the sponge on the right of the hole.  Unlike Morikawa, his chip was perfect and nailed the putt on 18th for a closing birdie and a final round 10 under par 63.   Morikawa bogeys the 16th after another indifferent chip and the disaster is complete-he is now 3 shots behind with 2 holes to play.  Morikawa was stunned and completely dumbstruck as to what might have happened–it’s as if someone had poured drugs into his Diet Coke.  His legs seemed wobbly and his demeanor ashen–something happened and he can’t account for why it happened.  Paul Azinger chirps, “the weak part of his game has come into play.”  He is a professional golfer, a major champion, playing at the highest level of the game–he has some records that are comparable to Tiger Woods but this never happened to Tiger Woods.  This couldn’t have happened to Tiger Woods-it wouldn’t have been allowed.  Tiger once won one of his US Amateur championships driving the golf ball all over the place but refused to yield to the vagaries of his driving, he produced the shots to win.  Morikawa couldn’t close the deal on this day–sometimes in golf, you count your margin of victory before it has been achieved and sometimes it costs you the victory.  Congratulations to Jon Rahm on his victory but Morikawa lost this event.  He now has to find a way to get through this experience and reestablish his confidence.  He is still a great player but the mental toll of this loss will weigh heavily on his future especially when he is contention again.  It’s amazing to me how the loss seems to count way more than the victory when it happens in this manner.  After all, Morikawa was able to deal with the pressure and all the shotmaking that enabled him to win the PGA Championship in San Francisco.  Why are those events forgotten while the Plantation loss seems huge?